The relationship between shear and moment identified in Eq. (3.72), that is, V = dM/dx,
indicates that the shear force at a section is the rate of change of the bending moment. A similar relationship exists between the load on a beam and the shear at a section. Figure 3.26b shows the resulting internal forces and moments for the portion of beam dx shown in Fig. 3.26a. Note that when the internal shear acts upward on the left of the section, the shear is positive; and when the shear acts upward on the right of the section, it is negative. For equilibrium of the vertical forces,

This equation indicates that the rate of change in shear at any section equals the load per unit length at that section. When concentrated loads act on a beam, Eqs. (3.72) and (3.76) apply to the region of the beam between the concentrated loads.
Beam Deflections. To this point, only relationships between the load on a beam and the
resulting internal forces and stresses have been established. To calculate the deflection at various points along a beam, it is necessary to know the relationship between load and the deformed curvature of the beam or between bending moment and this curvature.
When a beam is subjected to loads, it deflects. The deflected shape of the beam taken at the neutral axis may be represented by an elastic curve (x). If the slope of the deflected shape is such that d /dx1, the radius of curvature R at a point x along the span is related to the derivatives of the ordinates of the elastic curve (x) by

These relationships suggest that the shear force, bending moment, and beam slope and
deflection may be obtained by integrating the load distribution. For some simple cases this approach can be used conveniently. However, it may be cumbersome when a large number of concentrated loads act on a structure. Other methods are suggested in Arts. 3.32 to 3.39.
Shear, Moment, and Deflection Diagrams. Figures 3.28 to 3.49 show some special cases in which shear, moment, and deformation distributions can be expressed in analytic form.
The figures also include diagrams indicating the variation of shear, moment, and deformations along the span. A diagram in which shear is plotted along the span is called a shear diagram. Similarly, a diagram in which bending moment is plotted along the span is called a bending-moment diagram.
Consider the simply supported beam subjected to a downward-acting, uniformly distributed load w (units of load per unit length) in Fig. 3.31a. The support reactions R1 and R2 may be determined from equilibrium equations. Summing moments about the left end yields

R1 may then be found from equilibrium of vertical forces:

for bending moment, slope, and deflection can be expressed from x  0 to L/2 and again
for x  L/2 to L, as shown in Figs. 3.28c, 3.28d, and 3.28e, respectively.
In practice, it is usually not convenient to derive equations for shear and bending-moment diagrams for a particular loading. It is generally more convenient to use equations of equilibrium to plot the shears, moments, and deflections at critical points along the span. For example, the internal forces at the quarter span of the uniformly loaded beam in Fig. 3.31 may be determined from the free-body diagram in Fig. 3.50. From equilibrium conditions for moments about the right end,

Also, the sum of the vertical forces must equal zero:

Several important concepts are demonstrated in the preceding examples: 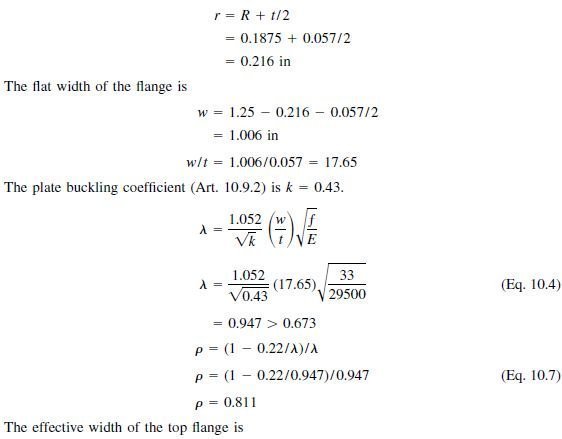